August 15, 2020
My humble attempt at using the Ionian Ontology generator from Liche’s Libram blog as an inspiration for a plane of existence. Based on this prompt: This world is an expanse, mostly void, with 3 dimensions organized into a sphere with a single point which is the "center" or "bottom" of the universe. There are three elements: magma, iron, and ectoplasm, which settle in concentric shells around the center in that order. The elements can spontaneously transmute according to the order: magma → iron → ectoplasm Small but regular amounts of magma are spontaneously generated in vacuum conditions. The more intelligent entities are observing something, the faster things get. This plane consists of 6 concentric spherical layers: Surface. Upper ferrous layer. Intermediate magmatic ocean. Ethereal void. Lower ferrous layer. Magmatic core. On the surface, gaseous ectoplasmic compounds form a bleak foggy atmosphere. Liquid ectoplasm forms a slimy turquoise tinged ocean. From the
Post a comment
Read more

August 03, 2020
With a new outlook on the situation Morgan and Irsia left for Bleak Hope early on the morrow. When they returned there was a message waiting for Morgan, from Saskia. Before she could read it though she was interrupted by a nearby commotion. Morell got into scuffle with a local woman name Artiga. He was not faring too well by the looks of it. Partially due to his burns and partially cause he was facing Artiga's iron axe unarmed. Morgan tried to reason with her but she would not back down, saying Morell has made a promise to her before her parents and before the gods. Morell refuted that the promise had no weight anymore as it was not bound by iron. Still Artiga demanded a compensation in blood or bone. And old and mostly forgotten tradition demanded that broken proposals be compensated either by gifting a wyvern bone or by chopping off the left hand of the offender. Naturally Morell wanted to keep his left hand, however it's not like acquiring a wyvern bone is a trivial thing. T
Post a comment
Read more

July 22, 2020
Banished from Eaglespire Morgan set off on a journey to the nearest settlement of Bleak Hope. Irsia, the recruit she saved previously joined her as she was still recovering from the wounds she suffered during the duel. They set of early in the morning and by the time they had to break the camp for the night they encountered a large caravan heading towards Bleak Hope. Morgan and Irsia exchanged few pleasantries but ultimately had to make a camp and focus on their journey. Having some time for herself Morgan attempted to dress her wounds but all she managed to do was make herself have a restless night. In the morning Morgan decided to take a better look at the surrounding terrain, deliberating which path was easiest to follow. Her expertise as a Wayfinder no doubt helped her but the journey was still arduous and their supplies were dwindling now. They've found themselves in a untouched part of the forest. A perfect opportunity to gather and hunt. Unfortunately as luck would have it a
Post a comment
Read more

July 21, 2020
Experience from the perilous journey she undertook last time has made Morgan a better wayfinder. She also spent some time easing her mind by celebrating in the company of the recruits from Foxhollow and the villagers from Eaglespire. After this she decided to focus on her new task, stopping the rogue mystic from the Lonefort outpost. She attempted to gather information about him and the outpost from the locals however she gained an unwanted attention of someone connected to the rogue mystic. They've kidnapped one of the recruits called Irsia and demanded to meet with Morgan alone. Morgan obliged but naturally made a backup plan where the rest of the recruits would swoop on the location if anything went awry. She even gained a support of few trustworthy members of the Eaglespire settlement. Meeting the rogue mystic's associate she learned it's a woman called Saskia. Or at least that's what she told Morgan to call her. Morgan chose a cunning approach and attempted to pull
Post a comment
Read more

July 20, 2020
I started by customizing the setting, choosing randomly from given options. In my variation of the Ironlands, settlers came here for the simple reason that their homeland was overpopulated. The lands are dotted with mysterious metal pillars which are worshipped and feared in equal measure. Villages within southeastern regions are fairly well established even having well-trod roads connecting them, however the settlements in more mountainous and forested areas rely on the services of experienced wayfinders to lead trade caravans through the inhospitable wilderness. Communities are generally lead by elected overseers and don't have standing armies or even trained militias. Both magic and religion are very prominent within the Ironlands. Almost all people know a helpful ritual or two and gods are believed to secretly walk among the living. Firstborn, the original inhabitants of this land, like elves, trolls, giants, elemental primordials or wolf like Varou still hold great deal of pow
Post a comment
Read more

December 23, 2019
Generate Roll twice and combine for "What they look like". If you get two contradicting entries roll once more for unifying trait and make the contradicting traits be different types of the same monster. What they look like: Large beaks Four legs Long tongues Thin blade-like claws Leathery wings Towering physique Big brightly colored noses Glowing eyes Retractable horns Transparent skin Six arms Slimy body Armored torso Retractable appendages Clockwork body parts Hooved feet Overgrown exposed brains Acid glands Organic trumpets Lighter than air gas sacks What they're good at: Mathematics and geometry: To the point where they can use it as a form of magic. Tinkering: Masters of setting and repairing traps. They can construct simply low intelligence automatons. Singing: Able to weave charms into their songs and buff their allies with their voice alone. Blacksmithing:  They can forge all metal of this world and couple others. Able to cr
Post a comment
Read more 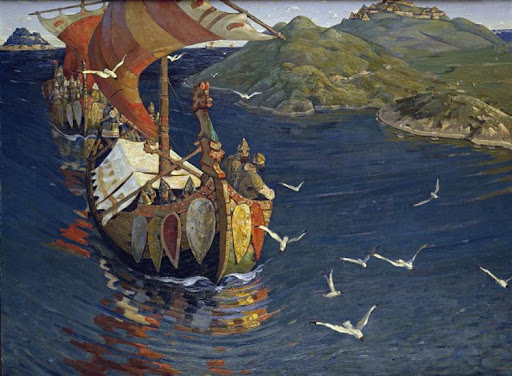 Lejeune  from the OSR Discord has requested this prompt from the Secret Santicorn this year:  “something including the works of nicholas roerich maybe nordic inspired go hog wild”. Since, I've never heard of the name it was time to do some googling around. Found out Nicholas Roerich was a Russian painter (mostly, though he multi-classed into other things as well) from the turn of the twentieth century. At brief glance his works seemed to focus on Nordic and Russian themes and later in his life on the Himalayas. Mountaintops stretch as far as the eye can see. It all used to be ruled by the Drin Empire. Before the Spider Princess died. Now people come here to find enlightenment. Carving gods into the stone. Storm Raiders travel the clouds on their longships. Burning the monasteries to the ground and forcing captured to be oarsmen on their ships. Hermit shamans of old raise wooden totems and fuse their bodies with animal skin. Many ancient wonders lie within the Track
1 comment
Read more
More posts